This is a reposting of an article I originally wrote on my Developing for Dynamics GP blog.

From the Translating Dexterity Applications Series.

During the course of this series we have discussed how you can change terminology, or even the entire language of a Dexterity application.  We have discussed flipping the windows for languages that read from right to left.  We have also discussed using languages which have different character sets.

Languages such as French, Spanish and German etc. can use extended character such as ç è é ê Ö.

Languages such as Hebrew, Arabic, Thai and Vietnamese can use an entire extended alphabet, but they are all still single byte languages. A single byte language only needs an 8 bit value (0-255) to represent a character. Use of these character sets while handled by Dexterity is still not supported by Microsoft.

So what about Chinese, Japanese or Korean characters? These languages are double byte languages that require 16 bits (0-65535) to represent a single character.

Dexterity does not support double byte languages. This is mentioned in the Knowledge Base (KB) article Double Byte Languages (KB 864986). While the article says double byte is being evaluated, I doubt it will ever happen.  Microsoft has other Dynamics products which already support double byte, and adding support to Dynamics GP is not on the wish list.

Now that the official response has been given….

I have heard of Microsoft Dynamics GP being used in countries that are not supported.  They are not supported because Microsoft has not performed any localisation for that country and so many of the local taxation and legal requirements are not met without futher customisation by the partner or customer.  Usually these installs are based on the US English installation and are not translated.

Back in the days of version 6.00, a team in the Asia Pacific region started a “proof of concept” project to see whether it would be possible to have a Chinese version of Dynamics GP.  The project was stopped as there were too many issues with trying to use double byte languages when Dexterity was never designed to handle double byte.  The project was able to use the translation tool with a product called RichWin to create a Chinese interface.  Below is a screenshot of a translated window (can you guess which one? .. No cheating if you read Chinese.): 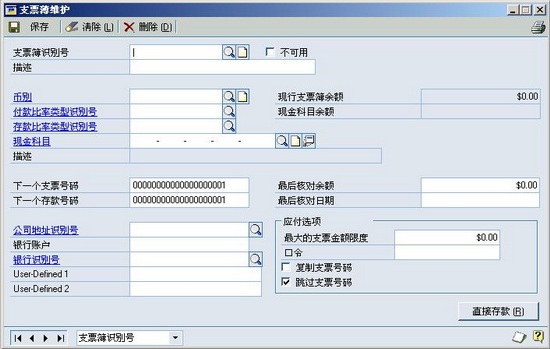 Before you ask me where you can obtain a Chinese version of Microsoft Dynamics GP, this screenshot is all I have.  The project is long gone and no Chinese version exists.