Today is the 26th of January and in the “Lucky Country” it is the Australia Day public holiday.

Australia Day is celebrated on the anniversary of the 1788 arrival of the First Fleet of British ships at Port Jackson in New South Wales and the landing of Governor Arthur Phillip in Sydney Cove.

While not everyone likes celebrating on the anniversary of the day that the British claimed Australia, it is still a day to celebrate everything that this wonderful, expansive country of ours provides for us to enjoy one of the best lifestyles in the world.

As I write this log it is 11am and the temperature is already 38C (100F) and the forecast is 40C (104F). Lucky for me the house is comfortable thanks to air conditioning that has been running non-stop for the last day or so.

Around the nation there are lots of events planned.  Check out the official website for details:

We are planning to drive to some friends for a BBQ dinner and then cycle into the city for the Perth Sky Works fireworks display. This was the first fireworks display in the world to be performed with synchronised music starting with the Sky Show in 1985. (Watch video here).

Update: The Sky Works fireworks display was cancelled last night after a plane crashed into the Swan River killing the pilot and passenger during a pre-fireworks air show. Our thoughts go out to all the families affected.

Anyhow, those of you who are not from Straya, the chart below should help you feel more Aussie by working out your nickname. Post it in the comments below. 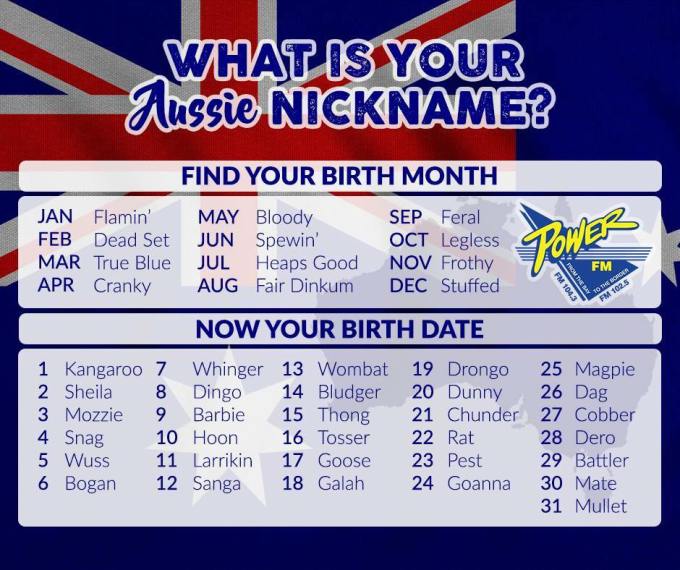 To finish we need to remind everyone that we have the highest number of dangerous creatures in the world and so here is a chart to help you identify some of the common spiders you could come across on a daily basis.