In the previous article: #ReigniteGP 2017 in Gauteng, South Africa – Part 1, I covered all the lead up days to the conference which included an wonderful day visiting the Lion & Safari Park.

But now the real work starts with two solid days of conference and lots of presentations followed by two days of academy training.

Reignite GP 2017 was hosted by Braintree with Dynamics Africa as the headline sponsor.

The event took place on Monday 22nd and Tuesday 23rd May 2017 and included pre and post event Academy training.

The venue for the conference was the beautiful Wanderers Club which was next to the hotel and only a short walk across the car park. The Wanderers Club was founded in 1888 and the current club house dates back to the 1930’s. Some sections of the club house had to be rebuilt and refurbished after a fire tore through the building in 2004. The inside of the building is decorated with lots of sporting history and memorabilia. If I had not seen the photos of the fire in the Chariot’s bar, I would have never known.

The first session of the conference was a welcome and keynote session for all the attendees, with Pieter Cornelius as the Master of Ceremonies. Just before the conference got going, Mariano and I set the mood with a little audience participation and a photo opportunity.

Pieter then introduced Heath Huxtable, Managing Director of Braintree, to the stage.

Heath welcomed everyone and then started with a series of slides debunking the myth that Microsoft Dynamics GP is dead.

Note: Photo has been edited, to avoid re-use out of context. 🙂

Reasons that this myth is completely false mentioned by Heath include:

Heath explained the purpose of the ReigniteGP conference and how we planned to get the attendees fired up and excited about the Microsoft Dynamics GP product and its future.

The final section of Heath’s session was to thank the organisers and sponsors of the conference.

The organisers and primary sponsors

Then it was the turn of Chris Dobkins, Mariano Gomez and myself to present the Keynote session. This was the first time I had been involved with a conference keynote session and it was an exciting challenge. 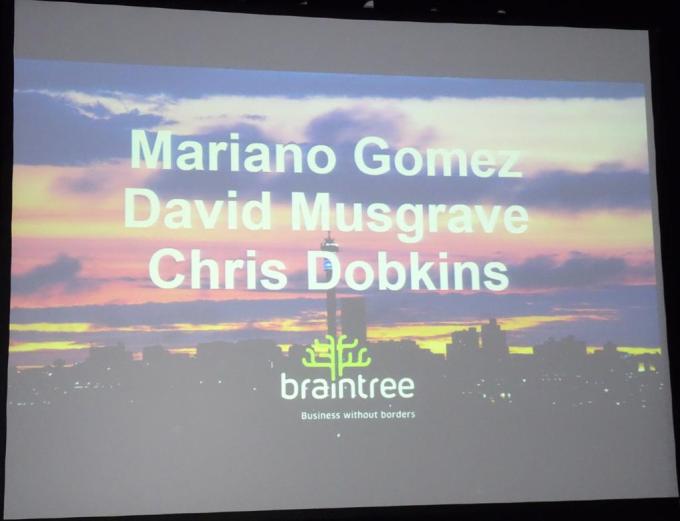 Our session, titled “Positioning Microsoft Dynamics GP”, was divided into three sections. After a brief introduction by Chris, I covered the Continuous Innovation that has always made Microsoft Dynamics GP a leader in its field. I mentioned some of the innovations from the history of the product:

All these innovations are possible because they were added to Dexterity, the language behind Dynamics GP, which means all ISVs developing in Dexterity immediately get the benefits of these innovations in their products with little to no work needed on their behalf. I then ran through approximately 20 slides showing just some of the 500 or so features added to Dynamics GP in the last few versions.

Mariano covered the Microsoft Dynamics GP Roadmap and the Release Themes that are guiding the development team and their work:

After showing the Roadmap and pointing out that the future enhancements of Microsoft Dynamics GP will be guided by the top features requested by customers, Mariano reminded the audience to make good use of the Microsoft Connect platform to enter new product suggestions or vote for existing suggestions.

Chris closed off the keynote by discussing the growth of “The Cloud” globally and in South Africa. He called for customers and partners to resist the FUD (Fear, Uncertainty, Doubt) being spread by competitors because it is just not true. He finished with a challenge for all the conference attendees to become modern businesses by getting actively involved in the conference and embrace cloud technologies.

If you want to see the presentation that Chris, Mariano and I used, it is attached to the bottom of this article.

Following the keynote presentation, Pieter introduced each of the ISV sponsors with a chance for each ISV to show a video and/or make a short speech. 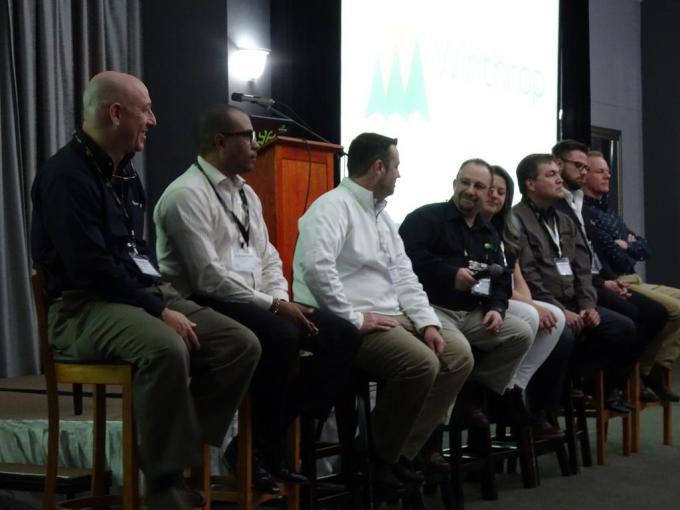 After the opening sessions, the conference continued with concurrent breakout sessions. Mariano and I had three sessions to present together and they were very well received.

The day finished with Skype conference link up to Microsoft’s Pam Misialek in Fargo, North Dakota, USA who spoke to the audience about the Roadmap and what to expect in the future. 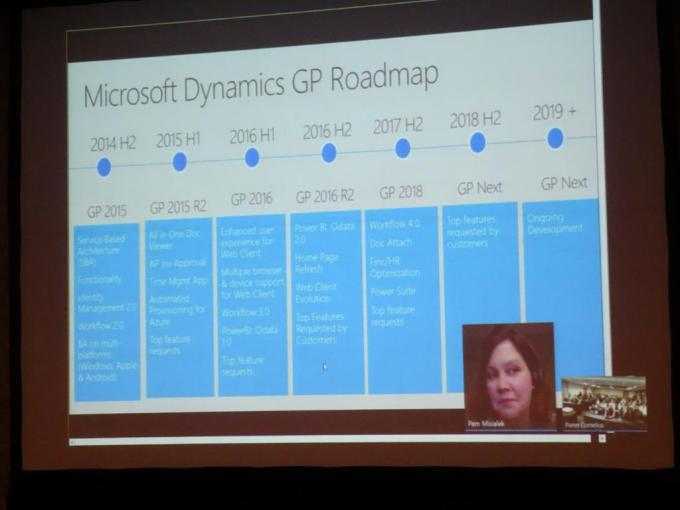 After the teleconference, there was a social function with drinks and nibbles including the opportunity to taste a number of local beers (for those who drink). While at the function, I was pleased to meet Anthea Cogill who used to work for Great Plains South Africa before the Microsoft acquisition and Ronald Laxton who used to head up Computer Initiatives in South Africa and was a major player in the Microsoft Dynamics GP community. I had worked with Ronald when I was with Sequel Technology selling Named Printers. Then it was time to get some rest before day two.

The second day started with a hearty breakfast in the hotel with the other international visitors. As usual Chris Dobkins had his array of morning drinks lined up: (from left to right) Fruit Smoothie, Orange Juice, Iced Water, Large Coffee Latte, and Percolated Coffee. 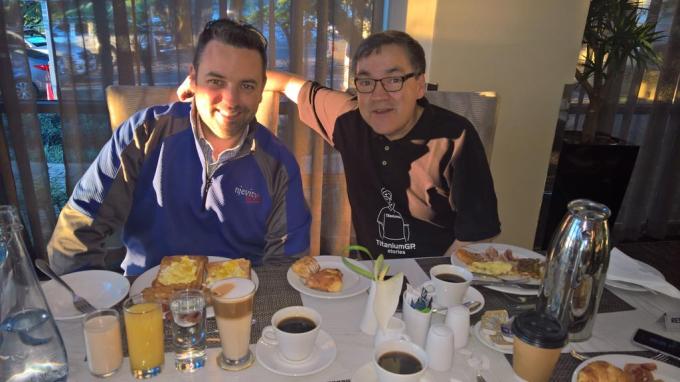 Mariano and I another three sessions together. Mariano also had a session on Mekorma’s products.

These sessions were also well received. Luckily the second Developer tips session was the last session of the day as it ran over time. whoops. 🙂

Sadly, Mariano had to head off the airport immediately after the last session to head home. For some reason he thought that his son’s graduation ceremony was more important than spending time with me and the South African GP community. All I can say is “Priorities!”. 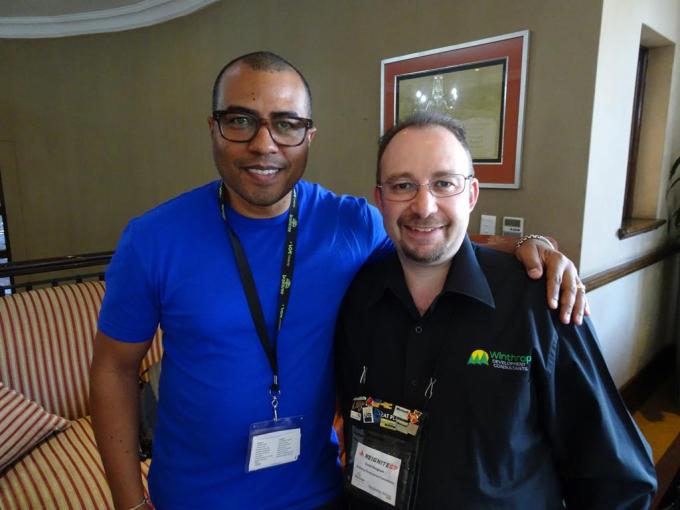 After the final sessions, the “hangers on” had a post conference drink in the Chariot’s bar in the Wanderers Club to relax and wind down after a very busy two days.

In the evening, Heath Huxtable had organised a dinner with some of conference attendees. Alicia and Ryan Weigel, Chris Dobkins, Melissa Sandrovich and I joined a number of the locals for a very good pizza at the Hyde Park Col’Cacchio pizzeria. 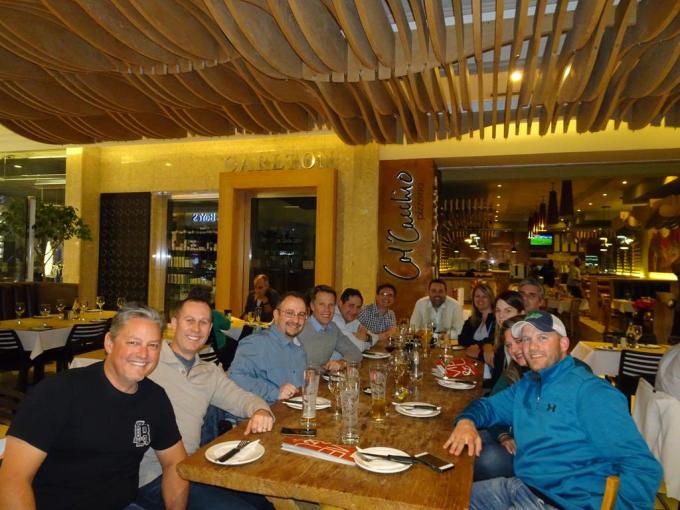 After dinner the five of us “internationals” went to see the “Guardians of the Galaxy, Volume 2” movie in the Hyde Park shopping centre’s 4DX cinema theatre. None of us had experienced a 4DX movie before and Ryan had not even seen a 3D movie before.

What is 4DX? Well, think 3D then add a chair that moves like a motion simulator to get to 4D then add environment effects such as strobe lights, wind fans, scented air and spray mists of water and jets of air fired into face.  Check of the 4DX Effects on the 4DX website.

The 4DX experience is something worth doing at least once, especially for an action packed movie like Guardians, but I am not sure I would want it repeated. All the motion and effects can detract from the movie rather than add to it. A little bit like those 3D movies that keep throwing objects directly at you!

On the day following the conference, I ran two, half-day, academy training sessions for GP Power Tools which were full. We had a lot of fun and the attendees learnt lots more about the tool, how to set it up and use it and what it is capable of doing for their Dynamics GP sites.

For the second academy day I did not have any sessions, but went into the Vox/Braintree offices to make myself available to those who wanted to catch up with me while I was still in South Africa. At the end of the day Anthea offered to drive me to the airport and very kindly stayed with me before it was time to go through security. 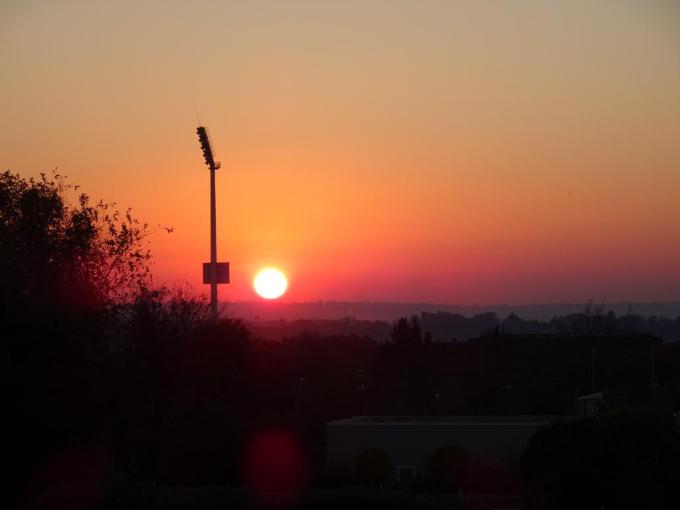 Thank you to Pieter for being the driving force behind the event. I know that I am looking forward to next year for an even bigger and better ReigniteGP 2018 conference.