So here I am in Nashville, Tennessee USA where I should be listening to music and relaxing. But that is not to be.

The class is designed to introduce developers to Dexterity, the language behind Microsoft Dynamics GP. The class spends about three days introducing all the basics and concepts behind the language and how to work with forms, windows, fields, datatypes and tables.

After this foundation has been laid, we spend the last couple of days working on an integration project which adds a window into Microsoft Dynamics GP and ties it into an existing window and the application navigation. We also introduce Dexterity triggers and use them to change the behaviour of GP code. I often joke that this course provides enough knowledge to make a developer dangerous! 🙂

This is a great class for any developer planning to work with Microsoft Dynamics GP, even if they do not plan to use Dexterity as their main development tool. It will explain to a Visual Studio developer many of the “weird” things that Microsoft Dynamics GP does and why it behaves the way it does. This knowledge can make a Visual Studio development much more efficient when working against GP.

I had 11 people in the class, 9 in the room with me at the Hyatt Place, nearby to where I was staying, and 2 remote students. I normally prefer not to have remote students as the Dexterity class does not lend itself to remote learning, but the two remote attendees had been in my class last year and this was just a refresher for them as they had not been able to use their knowledge from the Tampa class. You know…. use it or lose it!

The class went very well and was enjoyed by all. We had a class dinner on Thursday with most of the local students enjoying the good food at the Opry Backstage Grill as well as doing Tim Tam slams. I even got some of the attendees to try some Vegemite that I brought with me from Australia.

After the class was completed on Friday, myself and a couple other attendees moved hotels to the Gaylord Opryland Resort & Convention Center.

This hotel is just amazing, the picture above is just one of the three fully enclosed garden areas. Check out more photos from the website (link above).

The hotel complex is the largest non-casino hotel in the USA. Here is a list of some of the features of the hotel:

If you want to get an understanding of the scale and grandeur of the place check out this virtual tour site.

Once I got to my room, I unpacked the full “Stash” of goodies I brought over from Australia (less two packs of Tim Tams eaten during the Dexterity class). Lots of yummy goodness to hand out at sessions. 🙂

I spent the weekend relaxing, exploring the hotel, shopping and doing some more preparation for the GP Power Tools training on Monday 9th October.

Here are some pictures from the three main indoor atriums at the hotel, the first two are the view from my room: 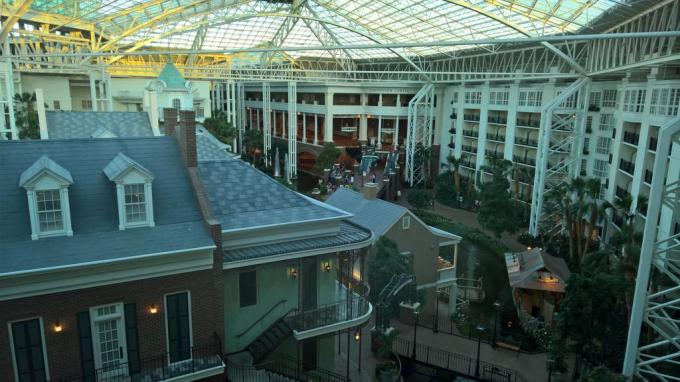 It is difficult to capture the scale of this place, but hopefully you get the idea from the photos above. Check out this PDF map:

On Sunday, we could see the preparations for the conference as they put up the signage for the Summit conference.

I also caught up with many of the Dynamics Communities team including Andy Hafer, Bob McAdam, Molly Fuchsel, Shane Wolf, Daisy Eck, Rich Beliveau, Sue Whitney, Shanna Hensch. Always great to catch up with these guys.

For dinner, Steve, Janet (taking photo) and I were joined by Leslie Vail (The Dynamics Confessor), David Morinello (who was in my Dexterity class), Amber Bell (The Training Dynamo) and Janette at the Findley’s Irish Pub within the hotel.

Tomorrow, the pre conference GPUG Academy training starts and I will be training GP Power Tools all day.