This week started for me with a very interesting phone call. It was from a gentleman from the United States looking for algebra based educational materials. I thought he must have the wrong number and forwarded him to Winthrop Australia (a Perth based computer firm associated with the University of WA)*. I thought that they would be able to assist due to their association with the university and education.

Anyhow, they sent him back to me and during the second call, I realized that the caller, Jim, was talking about my Friday Funny posts which sometimes included algebra problems! Once we had worked out the common ground, Jim and I had a long chat about Order of Operations and adding negative numbers. Jim is part of a Facebook group and often posts puzzles for the others to solve.

He found the same problems that I found. Many people don’t know about Order of Operations, or do know, but cannot implement them correctly or just cannot add negative numbers. For more information see: Answer: Only for genius ?? 3 – 3 x 6 + 2 = ??.

That phone call prompted me to find a new graphic algebra problem for you to solve….

The puzzle image follows a standard format where it provides the answers to the first three equation, which should provide the information you need solve the fourth equation. 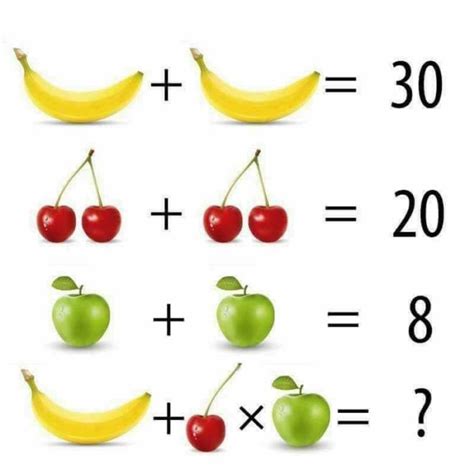 Below is a poll for you to record your answer:

Please comment on how you went, but don’t give away the answer.

Thanks for the chat and the great feedback Jim.