This is a reposting of an article I originally wrote on my Developing for Dynamics GP blog.

As mentioned in my previous post, RoboCup Junior WA 2013 Rescue Premier & Senior Dance State Champions, my sons and I went to Brisbane, Queensland for the Robocup Junior Australia 2013 National Championships on 21st and 22nd of September 2013. Here is the lowdown on what happened.

Getting There and Getting Ready

We were part of three teams travelling to the competition from All Saints College. Below is a list of the teams (with the competition division), students and accompanying parents:

The trip started on with a Thursday night “Midnight Horror” flight from Perth to Brisbane (leaving about 11pm and arriving at 5am). I told the boys to get some sleep on the flight, but by the time you take off, eat and land there is not much sleep time (especially when we are losing 2 hours due to time zones). We flew with Julian and Angela on the same flight. Once we arrived in Brisbane we picked up the hire car (nice big 8 seater Hyundai i-Max) and waited at the airport for Asriel and Claudia who arrived on a slightly later flight.

We then drove to the Chasely Apartments in Auchenflower (just near the city). This was a perfect location only a few minutes from the St Lucia campus of the University of Queensland where the competition was being held and a few minutes from Somerville House where the Saturday night function was being held. After settling in, the boys and I had a nap to catch up on some sleep. I had planned to catch up for lunch with some Brisbane based work colleagues, but the boys were still fast asleep and so we cancelled the lunch and just let them sleep. I wanted them as fresh as possible for the busy weekend ahead.

Friday afternoon we went down Toowong Village shopping centre and had lunch in the food court, we then bought some food for breakfasts and snacks. After dropping off the food we drove to the University campus and had a look at the venue. We caught up with Nick, CJ, Sandy and Kate at the venue and the boys were able to take light readings and test their robots on the actual competition surfaces and courses. When we were “kicked out” of the venue (well they needed to close up for the night), we dropped our stuff back at the apartments and went out for a nice pizza dinner at Pizza Capers. It is really a take away place, but they did have some tables so we ended up eating there. After dinner we relaxed a little back at the apartment and Aaron stayed up making some changes he had thought about to his robot, Jimmy.

Saturday arrived and we went to the competition venue so that we could do some further testing in the time before the day’s competition started. The first day of the competition is the primary school divisions and so our teams were not competing until Sunday. We left the venue and went back to the Inn on the Park apartments were Nick, CJ, Sandy and Kate were staying. We had planned to let the boys work on their robots in the apartment which had more space than ours, but Sandy found a Recreational Room which we were able to commandeer for the day. All three All Saints College teams spent the day working on their robots (and dance routines). In the evening we went to the RoboCup Junior function at Somerville House and had a chance to relax and chat with other teams at the competition. We left the function a little early as the boys wanted to do a little more work on their robots and get as much sleep as possible before the competition.

Welcome to Sunday and competition day for Rescue Premier and Senior Dance divisions. We got an early start so that we could arrive at the competition venue as the doors opened.

Once the competition started, I spent the entire day moving between the Dance and Rescue areas taking videos of the All Saints College teams. So there is not much I can flesh out about the day other then to explain the results and include videos and photos.

The Pickle JAR and Teddy (Julian, Asriel and Rohan) had to perform in two preliminary rounds before they were selected as one of the four finals teams. The preliminary rounds were not perfect with Teddy needing to be repositioned manually twice and crossing the performance area (3m x 3m) boundary in the first round. In the second round, Teddy needed to be repositioned once and came close to crossing the performance area boundary, but this time the light sensor worked and stopped Teddy moving too far. While these performances were not Teddy’s best, it was enough to get Teddy into the finals and cement him as the crowd favourite.

Teddy’s final performance went perfectly and is shown below for your viewing pleasure:

We did not know the results until they were announced during the closing and award presentation ceremony. When they announced that Ted had come in at second place, there was a gasp that ran through the audience as Ted was a real crowd pleaser and everyone had expected him to win. They said that the difference between first and second was less than one point. Speaking to one of the four judges afterwards, she said it was because Teddy was not in time with the music 100% of the time when the winning team’s robots were.

Well done to Julian Loo, Asriel Yap and Rohan Musgrave for achieving Second Place in the national competition. They plan to be back next year.

Team Jimmy (Aaron) and Me, Him and It (Nick and CJ) had to compete in five preliminary rounds. After the five rounds were completed, the lowest scoring round was discarded and the top eight teams proceed to the knockout finals series. Right from the start we know that the other WA team, Connor Oswald and his robot Glados, would be one of the main challengers

Jimmy completed the first 4 rounds flawlessly and was equal first on points with the best time, but then in the fifth round, the ultrasonic sensor failed and Jimmy could not “see” the can and so failed to complete the rescue. This setback placed Jimmy (Aaron) into third position after the preliminary round, with Glados (Connor) in second position and Me, Him and It (Nick and CJ) in seventh position.

So both All Saints College teams and all three WA teams were through to the finals series.

The finals series were made of two courses (a speed course and a technical course) per round and the combined points (and time if necessary) would decide the winner of round. It was the same course layout used for the quarter, semi and grand final rounds.

For the Quarter Finals, Jimmy won his round, even with a restart on one run when Jimmy failed to see the silver strip leading into the rescue tile. Sadly, Me, Him and It were knocked out by Glados. Also the eighth position team knocked out the first position team, an upset which would help make the rest of the competition easier.

The Grand Final was between Jimmy (Aaron) and Glados (Connor). Both robots had performed well up to this point and could usually get full points on the courses. It was expected to come down to time with Jimmy being the favourite as he was consistently a little faster than Glados.

Well, the last video tells the story, Jimmy had a lead on time going into the second run, but got caught on the see-saw. The angle it hit the apex of the see-saw at meant that only the one wheel was moving as it was attempting to adjust to follow the line. Who knows, if the angle was different, or if Aaron (or I) had remembered to clean the dust off Jimmy’s wheels….. Anyhow, the restart cost too much time and Jimmy’s 45 second lead was eroded and then lost.

So the result was in. Jimmy came a close second to Glados. Well done to both Aaron Musgrave (Second Place) and Connor Oswald (First Place). Sadly, this was Aaron’s last chance to win this competition as he is in his final year of secondary school. Aaron does plan to come back to All Saints College as a mentor for the robotics club. 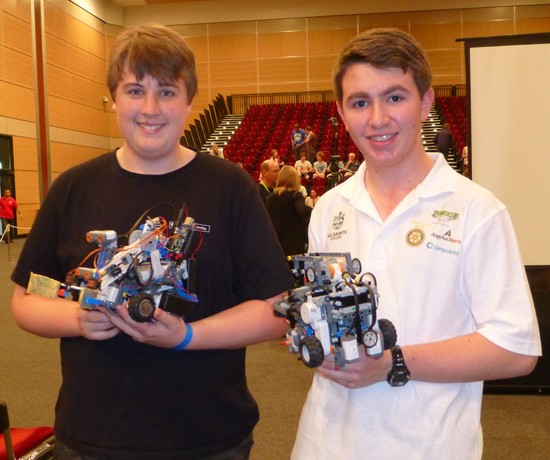 Here are the All Saints College teams. Second in both Senior Dance and Rescue Premier, and also finalists (7th) in Rescue Premier. We are all proud of your achievements

The competition was over and Nick and CJ (and mums) had to head towards the airport. The rest of us went for a celebratory dinner at the Boatshed restaurant. On Monday, Julian and Asriel (and mums) went to the Gold Coast for the day as they had later return flights. Aaron, Rohan and I decided to take it easy as we were all physically and emotionally drained. We ended going to the airport early and relaxing in the Qantas lounge until our flight home.

A huge Thank-You to the Robocup Junior state and national committees and the sponsors and organisers of the competition in Brisbane, especially, Greig Tardiani and Alexander Bush.

For the previous posts on the RoboCup robotics competition see:

Well done boys for an excellent job. I must say that writing this blog gives me butterflies as I remember how close the competition was.

One thought on “RoboCup Junior Australia 2013 National Championships and more”